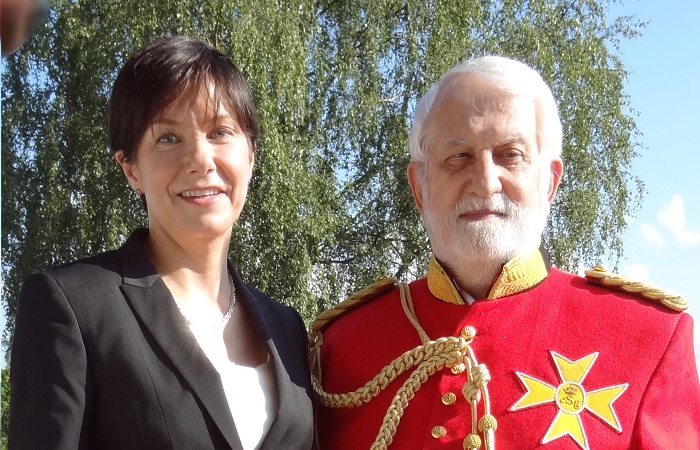 Sandor Alexander Markus (John Marc) was born on July 7, 1939 in Budapest, Hungary. He grew up under simple conditions in the Hungarian great planes (Puszda). As a child he experienced several recollections of his past lives on earth. Even while young, he had a philosophical inclination and spent most of his time alone.

A few weeks after finishing school in 1953, an event took place that completely changed his life.

A sunny morning in the Puszta, he was sitting under a willow tree watching some catfish playing in the muddy waters of a stream. Suddenly, he felt an electric chock in his back, as if he was hit by the lightning. Startled, he turned around quickly to see what was going on and saw a huge bright shining being a few yards away. The being was about eight or nine feet tall.

He shielded his eyes from the intense light coming from the being, but the beams penetrated his hands and reached his face, making him feel as if he was hit by millions of needles. The light enveloped him completely and lifted his consciousness to a higher dimension, to a transcendental state of mind. It opened a panorama to a new world of inexpressible beauty that only a few persons on earth have ever seen.

He was allowed to contemplate the universal database, the matrix, the eternal tapestry of the destiny of the world where the past, the present and the future are indissolubly intertwined in a sort of hologram. He also saw the cause of all suffering on earth and how every soul, looking like small sparkles of light, struggled on different levels in an everlasting cycle of evolution.

There was no past, present or future. Everything existed simultaneously.

He saw a new earth emerging in anguish and even saw his own role entwined with the events that would occur at the end of the twentieth century and the beginning of the twenty-first century. He saw how thousands of men and women would experience a spiritual identity, a higher cosmic consciousness growing within them, thus giving birth to a feeling of moral freedom and justice far beyond all forms of prejudiced nationalism.

He saw the same leaders, who once lived here on earth during the tenth and eleventh centuries, fighting each other over leadership in Europe, returning a thousand years later to bear the moral consequences of their former actions.

He saw Scandinavia, like the Bethlehem star rising at the horizon leading the way for all those seeking help from the shadow of darkness.

He saw the entire process of development in Europe and how a platform for action would emerge to lead Europe out of its spiritual darkness. This entailing new consciousness would eventually spread wide across the earth.

He saw different kinds of humanoid beings from more developed civilizations involved in the fate of the Earth, helping their younger siblings on earth to free themselves from the thrall of ignorance and unconsciousness.

He heard an internal voice telling him in his own language to leave Hungary and go to Sweden to establish a school, a center for a higher development of consciousness.

His mission would be to reestablish the uncorrupted cosmic doctrine, the true knowledge of mankind and his relationship to the cosmos – the same knowledge that the Buddha, Jeshu Ben Pandira (Jesus of Nazareth), Krishna, Muhammad, Guru Nanak, Pythagoras and others have promulgated through the ages, whose teachings had been misinterpreted, corrupted and misused due to ignorance, unconsciousness and the abuse of power.

After this experience Sandor A Markus gained a completely new perspective on life.

Since this event in 1953, he has spent his whole life evolving himself towards a cosmic consciousness. He wanted to know and not believe. It made him embark on a persistent search for the truth. He has during his search also had connection with many extraterrestrial groups working for the emancipation of the earthly civilization. These groups are mainly from Sirius A, Pleiades, Arcturus, Zeta Reticuli (Apex), as well as intelligences from other systems. These are all highly evolved and advanced cosmic beings.

Sandor A Markus has met with several highly developed spiritual master teachers during his search.

He visited Johnny Love-Wisdom in Ecuador, Vilcabamba Valley, and stayed there for several years. Johnny Love-Wisdom became known throughout the world as ”the Saint of the Andes”, the Father of the New Age, Maha Chohan of the 7th root race.

In 1981 in Dera, Punjab, India, Hazur Maharaj Charan Singh Ji, one of the greatest Indian Masters, initiated Sandor A Markus in Sat Mat (science of the soul) and in Surat Shabd Yoga.

Sandor A Markus has a M.D in complementary medicine and has worked and helped approximately 20 000 thousand people during his 20 years of practice.

He has used both western and eastern medicine in his practice.

He has a Ph.D. in sacred theology, i.e. regarding the northern Buddhism and Gnosticism.

Until 1991 he was basically shut off from all communication with the five-dimensional hologram or matrix, which contains the idea and the pattern behind every form and manifestation.

His main task during his first period of his life before 1991 was to acquire knowledge and experiences concerning the three dimensional physical, material world, the world of mind and senses, which are the ruling aspects of the existence on earth. Without this knowledge we, human beings, are unable to understand the “inner” esoteric spiritual path in its totality. The same rules apply the other way around.

He entered the five-dimensional matrix, consciousness in 1992. It was like a lid lifted from the top of his head. He connected to whatever cosmic information he was searching for. He became a spiritual cosmic master teacher and he has evolved ever since even more.

People are looking for their master outside themselves, and when they find him they do not recognize him. They are searching in various literatures, in foreign countries, in religions, philosophies, sciences, and ideologies. Humanity is roving about in the labyrinth of matter, of illusion like a stray dog.

When one is yearning to meet the true master in physical form as one pines after water when walking in the desert, the master will be there.

He has since educated thousands of people in the live sciences through seminars and workshops in Sweden.

And now, the founder of the A.I.C. “The Universal Academy for global human culture”, Sandor A Markus has initiated the A.I.C. Association to offer all interested beings the opportunity to evolve spiritually. This is done through this site behind logion and information is also handed out through various informatory internet channels.


Read More at the Unifier.se