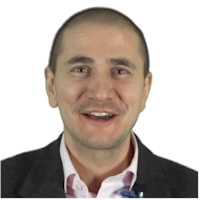 I grew up in a small town in central Sweden. After the usual education that was later focused on economics, I began working in the family business.

In the mid-1990s, I came in contact with Sandor Alexander Markus and his books, which made me start meditating according to his instructions to train my consciousness. Around 2005, I began attending the seminars and workshops that Alexander held in Stockholm, Dalarna etc. After one of these seminars a window opened up for a few weeks to the Super Consciousness in me, which made me realize that the knowledge conveyed by Sandor A Markus was needed by everyone for their continued development on Earth.

I later moved with my family to the village Vikarbyn, Dalarna County, Lake Siljan area, Sweden. From here the worldwide A.I.C. project emanates and I have been a co-worker on this project since autumn 2011.

My tasks within A.I.C. deal with Finances, Health programs, Administration, Audio, Video and Image Processing. I am  privileged  to have the possibility to support Sandor A Markus and work on the A.I.C. project for a Global Human Culture, to help all those wanting to achieve a higher qualitative consciousness, which is a necessity for the continuation of man and the earthly civilization.